The Puget Sound area is vulnerable to several types of seismic risks. We might fixate on “The Really Big One” - the offshore hazard famously profiled in The New Yorker - but other dangers lurk closer underfoot, and might actually deliver more damage to Seattle.

The nature of the ground beneath the city -- a roughly 4-mile-deep basin filled with soil and soft rock -- makes the urban core especially vulnerable to seismic shaking.

“In our 3D simulations, we see these basins light up with strong shaking, but we need to verify that these basins are shaped the way we think they are,” said Alex Hutko, a research scientist with the Pacific Northwest Seismic Network based at the University of Washington. “We know the basics, but there’s a lot of useful detail that could help us strengthen infrastructure in the right locations.” 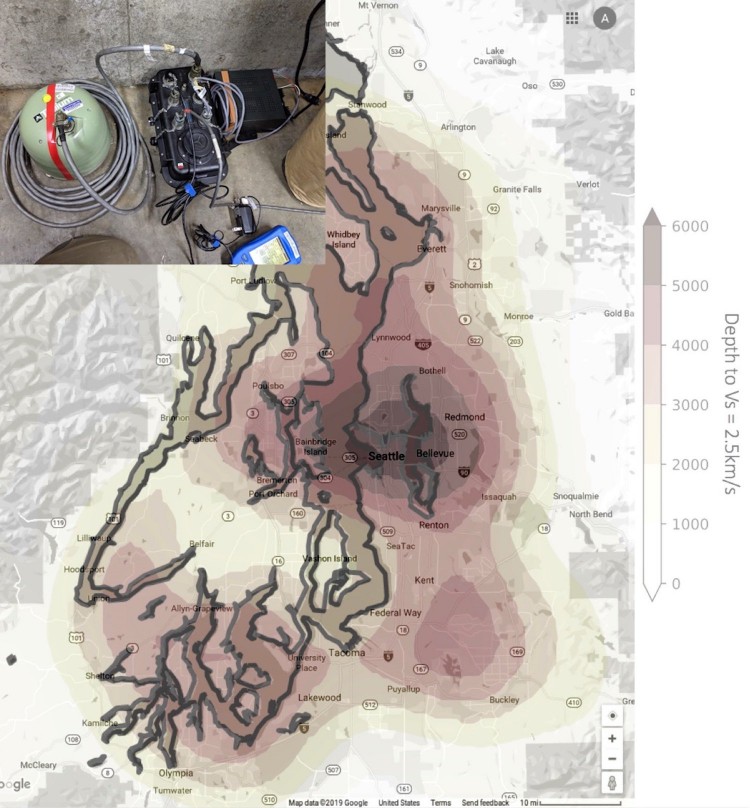 The brown shading shows the topography of the Seattle Basin, with darker brown showing the deepest section. Any location shaded brown is a potential test site for the UW team. The upper photo shows the sensitive equipment that researchers will use to monitor background vibrations in order to map the basin’s shape and contents.Pacific Northwest Seismic Network

Hutko is coordinating volunteers for a series of experiments, and is lead scientist of one of them, all of which aim to better map the Seattle Basin and study how the soft fill can magnify and distort the trapped seismic waves that can slosh back and forth like water in a bathtub.

Improved mapping of the basin’s overall shape and the underground features, such as neighborhoods that might experience stronger or weaker shaking, could eventually help to refine the urban building codes.

Puget Sound residents who want their property to be considered to host a station can submit their address and contact information at https://pnsn.org/about/seattle-tacoma-urban-experiment

The UW-based team will use background vibrations in the busy Puget Sound area to better map the features that could make one block shake more strongly than another. New seismology techniques and faster computers mean scientists can now use background noise to learn how waves travel underground.

The UW group has six very sensitive seismometers that can detect both fast and slow shaking. The researchers will put them out for three to six weeks at each site, moving from the Seattle area gradually south toward Tacoma.

The team is seeking hard floors, such as basements or garages. It takes researchers about an hour to install the equipment, which is about the size of a cooler and uses as much power as a nightlight. Researchers assure hosts that they don’t need to worry about tiptoeing around the sensitive instruments.

“We tested it in our own basement and had it right by our washing machine, and with a newborn in the house we did a lot of laundry,” Hutko said. “But looking at the early data, it was surprising how much good data we got from just one week.”

The experiment will watch how seismic waves travel over long distances to figure out the nature of the ground they have traveled through. Petroleum companies set off small explosions and then study the waves’ travel paths to map the subsurface layers. Seismologists often use a similar technique, setting off a small explosion and then tracking the results, but in this case the waves will be caused by everyday vibrations from natural and human activities.

“It seems crazy to put very sensitive instruments in the middle of a noisy city,” said Paul Bodin, a UW research professor of Earth and space sciences. “Seattle has all kinds of ambient vibrations -- traffic, waves on bodies of water, wind blowing on buildings, trains. It’s a situation that most seismologists would run from. But in this case, that noise is providing us with the data.”

The first round of data collection, now under way, includes a site at Woodland Park Zoo and other cement floors north of Seattle’s ship canal. Hutko’s team will remove the equipment in the first week of June and install the six instruments at new sites, moving slightly southward each time. They hope to eventually expand the study’s scope to include neighboring sedimentary basins in Tacoma, Everett and beyond.

“Since this region has so few earthquakes, we have to study the small seismic events and then extrapolate to how the ground may shake during larger earthquakes,” said Joan Gomberg, a UW affiliate associate professor of Earth and space sciences and research scientist with the U.S. Geological Survey. The USGS is funding some of the work.

It’s just a happy coincidence that several seismic experiments are taking place in Seattle this summer, which allows the groups from various U.S. institutions to coordinate their logistics and compare data.

The other experiments include: 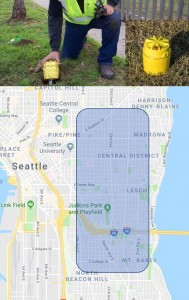 The Harvard University group is looking for yards located roughly inside the blue box. The photo shows the small seismic instruments that can be planted in grass.Marine Denolle/Harvard University

The research groups will learn from each other, and all are likely to record vibrations from the Boise State hammer-drop experiment.

Almost two decades ago, the Seismic Hazards Investigation in Puget Sound, or SHIPS experiment, recorded seismic waves during the March 2000 demolition of the Kingdome stadium just south of downtown Seattle. That provided a first map of the Seattle Basin’s shape, which will be updated with the new measurements.

For more information, contact Hutko at ahutko@uw.edu or Bill Steele, PNSN communications manager, at wsteele@uw.edu or 206-685-5880. To be considered as a volunteer site, enter contact information here.