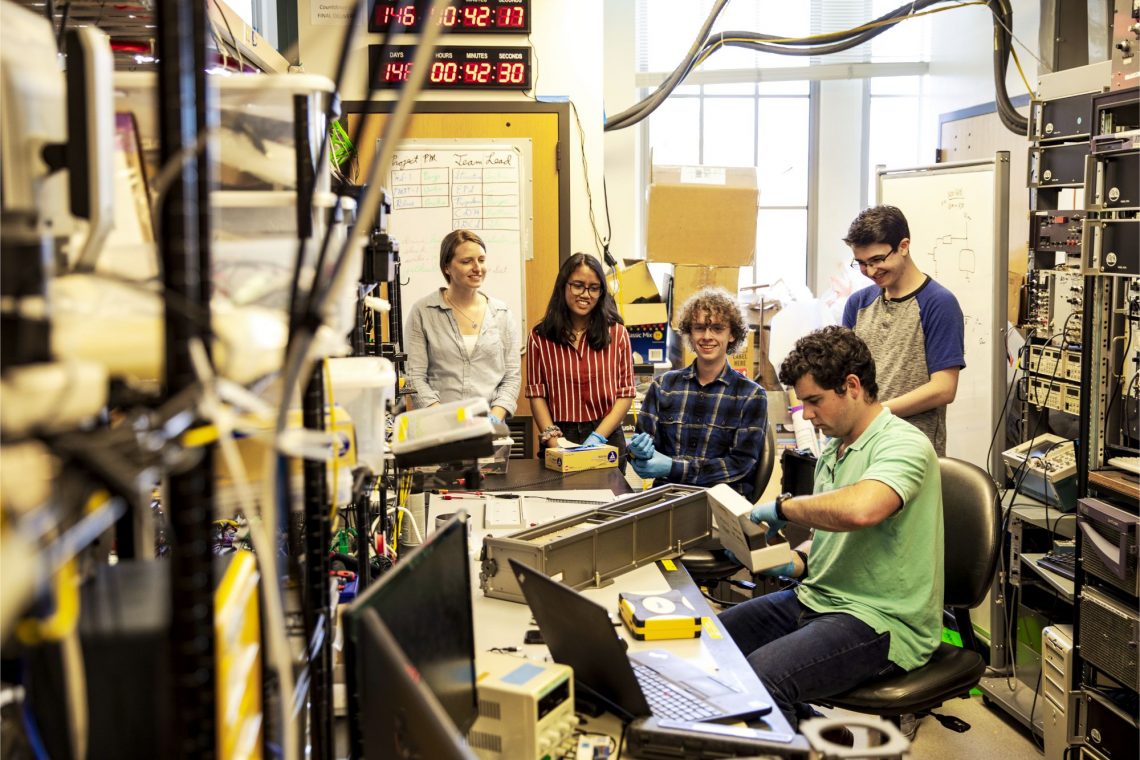 Team members Paige Northway, Anika Hidayat, John Correy and Eli Reed (back row, left to right) watch in June as Henry Martin of Nanoracks does a “fit test” to ensure that the satellite fits inside the silver box. The digital clock on the wall counts down the days, minutes and seconds until launch.Dennis Wise/University of Washington

A University of Washington satellite smaller than a loaf of bread will, if all goes well, launch this weekend on its way to low-Earth orbit. It will be the first student-built satellite from Washington state to go into space.

HuskySat-1 is one of seven student-built satellites from around the country scheduled to launch at 9:30 a.m. Eastern time Saturday, Nov. 2, from NASA’s Wallops Flight Facility on the Virginia coast. 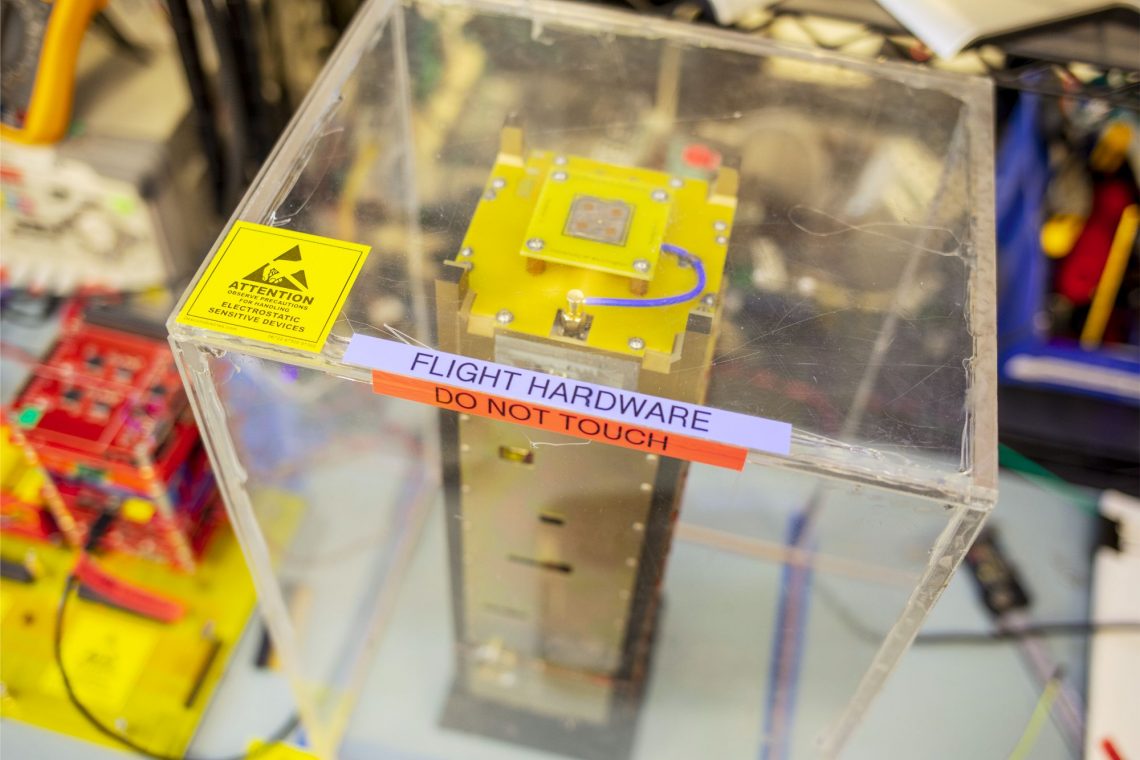 HuskySat-1 sits under protection in the UW satellite lab in June, as it prepared to leave on its journey to Virginia and then to low-Earth orbit.Dennis Wise/University of Washington

“It will be exciting once it’s in orbit,”said

HuskySat-1’s last moments on Earth will be broadcast live on NASA TV. The satellites are hitching a ride on the Cygnus cargo spacecraft, whose first stop will be the International Space Station to resupply astronauts and swap out materials. In early 2020 the spacecraft will leave the station and fly up to an altitude of about 310 miles (500 kilometers), where a NASA engineer will eject the student-build satellites. 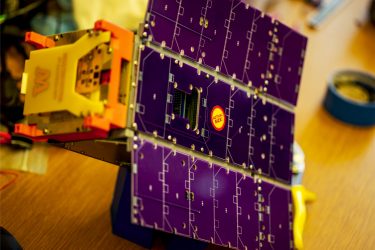 An earlier model of the satellite, shown here in the lab, had solar panels on wings that unfold. The final model has solar panels attached on three sides to provide electrical power.Dennis Wise/University of Washington

The UW creation is a type of CubeSat, a small satellite that measures exactly 10 centimeters (about 3 inches) along each side. HuskySat-1 is a “three-unit” system, meaning it’s the shape of a stack of three CubeSat-sized blocks. These miniature satellites were first created as a way for engineering students to test software with smaller, cheaper devices they could build from start to finish in a few years. But the devices are growing in popularity, with Planet and other companies now using nanosatellites for commercial ventures.

The UW satellite weighs just under 7 pounds (3.14 kilograms) and took five years to design and build. Undergraduate and graduate students from aeronautics and astronautics, mechanical engineering, computer engineering, Earth and space sciences, physics and other departments spent hundreds of hours building the system in the Husky Satellite Lab.

Its trip into low-Earth orbit is organized by Nanoracks, a Texas company that, like Spaceflight Industries of Seattle and other businesses, coordinates smaller groups to provide access to launch vehicles.

After extensive testing and final checkouts this summer, Northway hand-delivered the satellite in September to the Nanoracks facility in Houston, where it was placed into the box that will carry it to space.

“These students have gained firsthand experience on what is required to build and launch a satellite, and aerospace companies have already snapped up many of them,” said Robert Winglee, a professor of Earth and space sciences and the team’s faculty adviser as director of the UW Advanced Propulsion Lab. “Meanwhile, the UW is making its first steps to a continuing hardware presence in space. What more could you wish for?”

Three antennas installed on the roof of Johnson Hall will allow students to get information like position and altitude and send instructions to the satellite as it passes overhead. A camera built in collaboration with students at Raisbeck Aviation High School in Tukwila, Washington, will send back grainy, black-and-white photos of Earth. Students will also be able to control the satellite’s camera and thruster remotely.

“A lot of information is taught in classes, but only in a hands-on environment can you experience things like design, integration of subsystems, project management and documentation,” said team member Anika Hidayat, a senior in mechanical engineering.

HuskySat-1 will orbit at an angle of 51.6 degrees, traveling between 51.6 degrees north and south, at an altitude of 310 miles (500 kilometers) and at more than 4 miles (7 kilometers) per second. Once the students locate their satellite they will be able to predict its travel path. 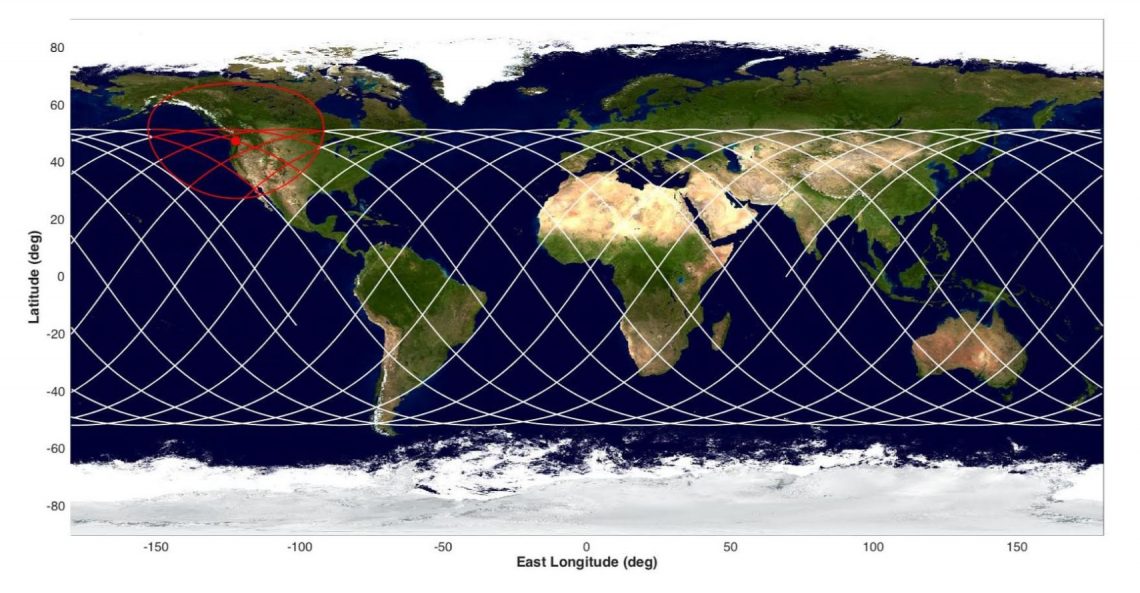 White lines show the satellite’s projected travel path, orbiting at an angle of 51.6 degrees from the equator. The antennas at the UW will be able to communicate with HuskySat-1 when it flies inside the red circle.Paige Northway/University of Washington

Some of the student-built parts will still be in test mode. A custom-built thruster uses sparks to vaporize small amounts of solid sulfur as a propellant. The thruster will fire about 100 times as the satellite passes over Seattle, only enough thrust to provide a slight nudge. A high-bandwidth communications system built by former graduate student Paul Sturmer, now at Blue Origin, transmits at 24 Gigahertz, allowing the satellite to quickly send reams of data. That system will send down a test packet from space.

“Usually people buy most of the satellite and build one part of it. We built all the parts,” Northway said. “It was a pretty serious undertaking.”

HuskySat-1 in the international nanosats database

The UW group will control HuskySat-1 for three months. In the spring it will transfer ownership and responsibility to AMSAT, the Radio Amateur Satellite Corporation, which provided the main communication system. The satellite will begin to lose altitude in about three years and will burn up as it re-enters Earth’s atmosphere. (NASA requires that all such objects deorbit within 25 years.)

HuskySat-1 grew out of a special topics course in the UW Department of Earth & Space Sciences. In 2016 members formed a registered student organization, the Husky Satellite Lab at UW.

“Being involved with this has taught me a lot,” said current team captain John Correy, a UW graduate student in aeronautics and astronautics. “But beyond that, it’s just validation that I’m in the right industry.”

As the Husky Satellite Lab wraps up this half-decade-long effort it plans to next tackle a NanoLab project-- a partly prebuilt system that can be adapted to conduct experiments in microgravity -- for travel aboard a Blue Origin vehicle. Students plan to complete that project by spring of 2020.

HuskySat-1 was supported by a NASA Undergraduate Student Instrument Project award, which funded the satellite’s development and launch with a private space contractor. The team also was supported by NASA, the Washington NASA Space Grant Consortium, the UW and several companies that provided equipment for the satellite and antenna.