Substantial damage to Seattle's Pioneer Square can be seen in this photo of the aftermath of the 2001 Nisqually Earthquake.FEMA News Photo by Kevin Galvin

The Pacific Northwest’s most recent large earthquake, the 2001 Nisqually earthquake near Seattle, was a magnitude 6.8, but history shows that the region could be rocked any day by a much larger event. At the American Association for the Advancement of Science’s annual meeting this week in Seattle, researchers from the University of Washington and federal agencies will discuss the latest science on megaquakes as an emerging topic of concern. 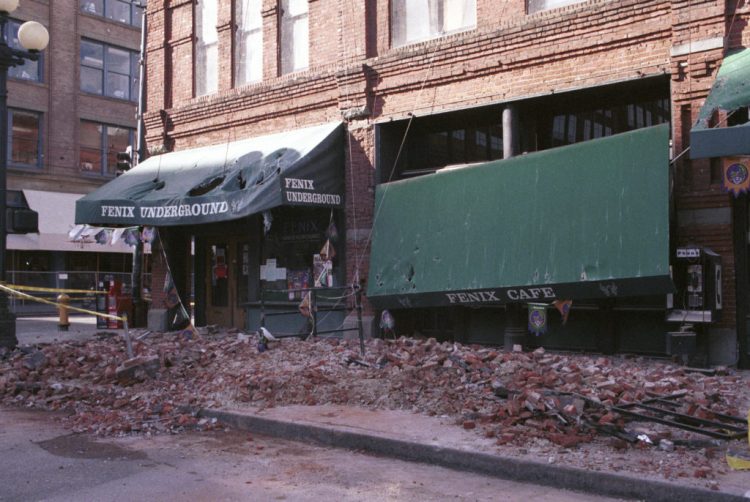 A set of three presentations and discussions, “Is the Coast Toast? Cascadia mega-earthquakes, tsunamis and potential impacts” will take place on Saturday, Feb. 15, at the Washington State Convention Center.

“We hope to inform the audience and public about what is and is not known about subduction-zone earthquakes and their effects,” Tobin said. “While the scenarios will be specific to Cascadia, the fundamental work is about investigating how fault movement launches tsunamis and under what conditions the seismic waves create ground shaking that affects buildings and other structures.”

The title references a line from the infamous 2015 New Yorker article, “The Really Big One,” that put Pacific Northwest megaquakes on the popular radar. Evidence from tsunamis shows that a huge earthquake occurred off the Pacific Northwest on January 26, 1700. The U.S. Geological Survey estimates a 14% chance it could occur again in the next 50 years.

The session will consider both what such an earthquake might look like, and what it could mean for buildings and other structures in Seattle -- many of which were built before the region’s seismic hazards were fully understood.

Diego Arcas, director of the Center for Tsunami Research at the National Oceanic and Atmospheric Administration, will begin the session at 3:30 p.m. with a discussion of new directions in tsunami modeling, which is the greatest hazard to communities on the Washington and Oregon coasts. Then, Erin Wirth, a research geophysicist at the U.S. Geological Survey and UW affiliate assistant professor in Earth and space sciences, will present on supercomputer simulations of Pacific Northwest megaquakes.

Wirth builds on her 2017 work, as a UW postdoctoral researcher, that simulated what a magnitude-9 megathrust earthquake could look like depending on where along the Cascadia subduction zone the offshore rupture starts, and how close the slipping gets to cities on land. The team has now refined its results and begun to apply the simulations to estimate infrastructure damage.

“Since we don’thave any direct observational records of the 1700 earthquake, our 3D supercomputer simulations of various possible magnitude-9 Cascadia earthquake scenarios has allowed us to quantify the range of possible ground shaking the Pacific Northwest might experience,” Wirth said.

Jeffrey Berman will also give an informal presentation at the UW booth (#219) from 2-2:30 p.m. Saturday, Feb. 15. See here for a full list of UW faculty booth appearances. Meeting badge required.

On Saturday, Berman will share results of a paper published this month in the Journal of Structural Engineering that considers how 32 midrise to tall building types, ranging from 4 to 40 stories, would fare in 30 different simulated Cascadia magnitude-9 earthquakes. The study led by Nasser Marafi, a UW postdoctoral researcher, finds that the current building codes underestimate how much shaking would occur as the loose soil in the Seattle basin amplifies the frequency of waves generated by offshore earthquakes, with strong shaking projected to last for almost two minutes.

“The Cascadia subduction zone ground motions have longer duration and different frequency content than the ground motions experienced in California, which has formed the basis for most U.S. building codes,” Berman said. “The impact of those differences on structural performance was a big unknown prior to this research.”

Each presentation will also include questions from those attending the AAAS annual meeting.

“We are hoping that our session communicates the latest in subduction-zone research, but we also look forward to opening up a dialog between panelists and the audience,” Duvall said. “The AAAS format is special that way, that it offers a real chance for two-way communication.”