After years in development, an earthquake early warning system known as ShakeAlert is on the cusp of being released in Oregon and Washington. The system that spans the West Coast was launched in California in late 2019. It launches to the public in Oregon on March 11, the 10th anniversary of the Tohoku earthquake and tsunami, and in Washington in May.

The system was developed through a partnership between the University of Washington and other West Coast universities and the U.S. Geological Survey working with state emergency management districts. The system uses ground sensors across the region to detect the first signals from a rupturing earthquake and then sends that information to computers and phones, providing seconds to tens of seconds of warning of an imminent earthquake.

UW News sat down with Harold Tobin, professor of Earth and space sciences and director of the Pacific Northwest Seismic Network, to learn more.

How does it feel to be on the cusp of launching the ShakeAlert earthquake early warning system in Oregon and Washington?

The ShakeAlert earthquake early warning system has been a big and technically complicated thing to put together, so it has taken many years. It is really exciting and satisfying to see that all that effort and work by many people is coming to fruition. It's a collaboration between the USGS, us at the PNSN at UW an also our counterparts at University of Oregon, Berkeley and CalTech.

The rollout for us has been somewhat incremental, in the sense that the system is functioning well now even as we work to improve our seismic network. We're detecting earthquakes, and alerts are being delivered to technical partners including emergency managers, utilities and schools.

But the stage of broadcasting mass alerts is really a new step, and one that brings to fruition the dream of earthquake early warning. We're really excited about bringing this directly to the public, and taking the capability we've developed and actually putting it to use to increase public safety.

You're director of the Pacific Northwest Seismic Network, which includes both Oregon and Washington. Why are the two states' ShakeAlert systems launching at different times (and not to be petty,but whyis Washington last)?

California had the most developed network of seismometers, it has the most frequent earthquakes and the largest earthquake hazard, since it has a lot of population right along the San Andreas fault. So it made a lot of sense for California to roll it out first in late 2019.

Ultimately, ShakeAlert is one unified system for the whole West Coast. This is a collaboration between the ShakeAlert partners and state emergency management. Oregon chose the anniversary of the March 11 Tohoku earthquake and tsunami for its launch date. Washington's Emergency Management Department wanted to do a bit more legwork to test the Wireless Emergency Alert system and to prepare the public, so chose to launch in May. We can think of it as a south-to-north progression for the West Coast-wide system. 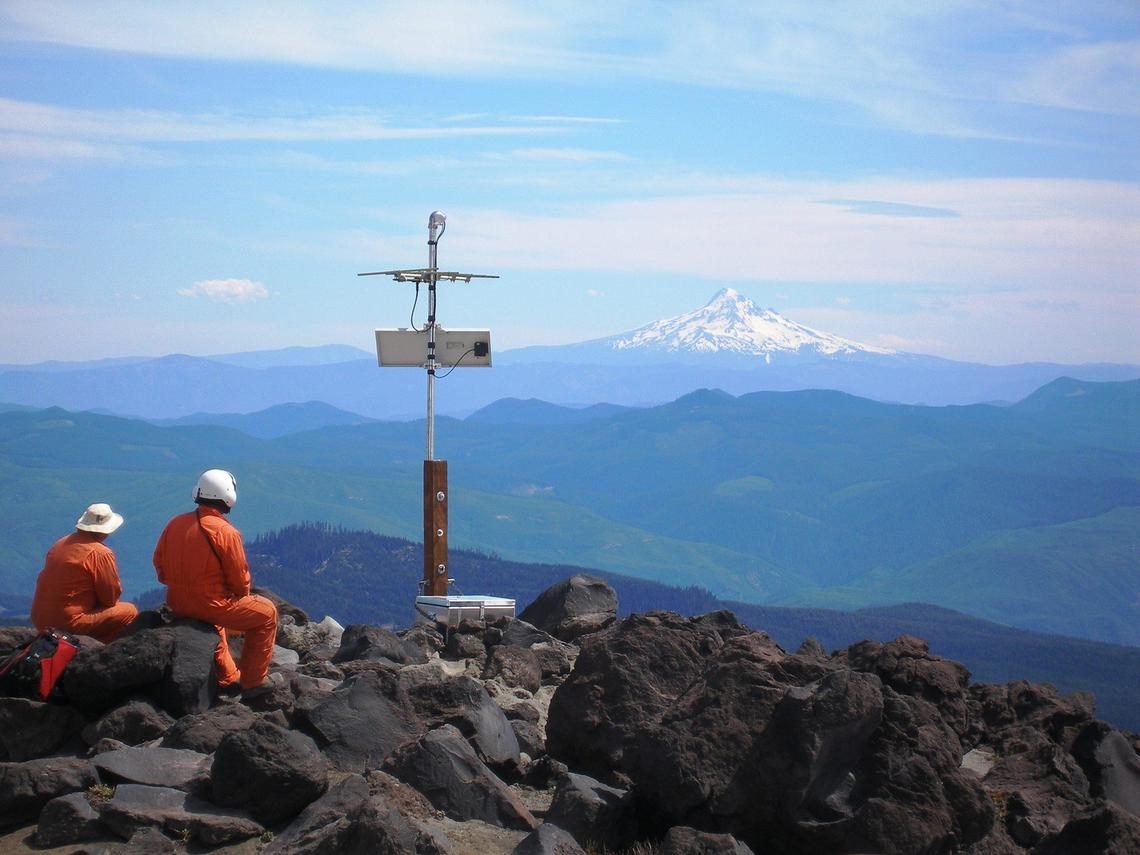 How can people in the Puget Sound sign up for the test taking place in late February? And how can Washingtonians sign up for the actual earthquake early warning system when it goes live in May?

Washington EMD and USGS have developed a simulated earthquake warning test message they will broadcast Feb. 25 on the Wireless Emergency Alert system, the nation's universal alerting system. The test will evaluate how the WEA system performs for earthquake early warning in the Puget Sound area. For technical reasons, WEA doesnot distribute alerts as fast as we'd like for earthquake warnings. A delay of 30 seconds might not matter for an Amber Alert, but for earthquake warning systems that would mean many alerts would arrive after the strong shaking has begun.

You have to opt in for the test, which is for users in Pierce, King and Thurston counties. Once ShakeAlert goes live in May, earthquake alerts will go to anyone in Washington who hasn't opted out of the Wireless Emergency Alert system.

There will be two other ways to get earthquake alerts. If you have an Android phone device, Google has embedded it in the mobile operating system in late 2020. So those devices in California are getting alerts now, and we expect Android alerts will go live in Washington in May. We hope other phone operating systems will follow suit. Another option will be to install on your device an app, like QuakeAlertUSA, built by one of the licensed ShakeAlert partners. We hope several of these apps will be available by the end of the year.

Washington ShakeAlert is a collaboration between the USGS, Washington Emergency Management and the PNSN. Can you explain how the three groups collaborate?

ShakeAlert is operated by the USGS in partnership with the PNSN and California seismic networks. The data that is generated to detect the earthquakes in Washington and Oregon comes from the PNSN, the seismic network operated out of the UW and the University of Oregon. We are direct partners in the research and development of this system. At the UW, we operate one of three computer systems that ingest the data and issue the alert messages; the others are at UC Berkeley and Caltech. There's a strong partnership between the PNSN and the USGS on earthquake detection and the continuing development of the system that issues the warnings. Washington Emergency Management is responsible for public safety, and so they are determining the types of public alerts that will be released, the messaging, public education and appropriate responses.

This is a great example of a partnership among all those entities. We are all working toward this same goal, of increasing earthquake awareness and public safety.

The PNSN began testing the system back in 2015 with early adopters. What have you learned from that experience?

A system like this is complicated, and will reach everyone, so we have to test it really extensively. We're decreasing the number of false or missed alerts in our beta system. Just seeing more and more events has allowed us to improve the algorithms, to distinguish between a false alarmand a real signal, and to better pinpoint the magnitude and location of the earthquake. A typical time frame is now 2 seconds for our computers to decide on the location and magnitude of the earthquake and to generate the alert -- the pace that that happens is unbelievable.

Now that the system is about to go public, how will other businesses, schools, organizations or agencies be able to incorporate these alerts into their emergency plans?

The USGS licenses partners to develop products that take the ShakeAlert message and can connect to other systems. A number of those licensed partners offer systems that can be adopted, such as a box that can be hooked up to a school PA system and automatically issue a prerecorded message that alerts students to drop, cover and hold on. Any business that has staff in a facility can think about how they can incorporate earthquakeearly warnings into their own facility. ShakeAlert messages can also trigger automated actions to pause manufacturing processes, move elevators to the next floor and open the doors, close valves on reservoirs, and initiate other loss-reduction actions.

What should someone do when they get their first "real" alert?

When someone gets an alert, the appropriate action to take is to drop, cover and hold on. It's important to get under a protective cover. Most injuries from earthquakes in the U.S. are not from the catastrophic collapse of a building but from falling objects - lights, ceiling tiles, etc.

If you're driving in a car, the appropriate action would be to pull over and stop the car, if possible. If you're in a building, stay in a building. The message is really to brace yourself -- drop, cover and hold on. That message, to pause and protect yourself, is key. (Washington Emergency Management has more tips here.)

What about British Columbia? Will the earthquake early warning system extend across the border?

Natural Resources Canada is working in parallel to develop an earthquake early warning system. We already use data from seismometers in Canada, and we incorporate that information in our alerts -- earthquake waves don't stop at the border.

Can we expect any improvements or changes coming down the line?

Yes, we're improving the system all the time. We are going live with this system because we know that it works, but we're also continuously improving the system. We have hundreds of seismic stations in place but we're adding dozens more, so that we can optimize the network to detect earthquakes wherever they occur within the region.

We're also continuously improving the computer algorithms that detect the raw data and decide where and how big the earthquake is. Once it goes live, there will be no pause in improving the system. We would also love to add more offshore detection systems, since offshore quakes are a challenge to detect accurately.

For me, this is an exciting example of science to action, of things that are driven by fundamental science and research in seismology that show the way to something that can do some tangible good for society -- to increase public safety. It's exciting to see that happening with the ShakeAlert system.

For more information, contact Tobin at htobin@uw.edu or Bill Steele, communications director at the Pacific Northwest Seismic Network, at wsteele@uw.edu and 206-685-5880.