In the Cascadia subduction zone, medium- and large-sized "intraslab" earthquakes, in which the slip happens within the oceanic plate and below the continental plate, will likely produce only a few detectable aftershocks, according to a new study from the University of Washington and the U.S. Geological Survey.

The findings, published April 13 in the Bulletin of the Seismological Society of America, could help seismologists better forecast aftershocks in the Pacific Northwest. 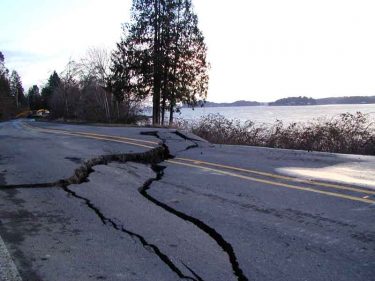 This photo shows Highway 302 after the 2001 Nisqually earthquake, which had few aftershocks.USGS

Seismologists currently make aftershock forecasts based in part on data from other subduction zones around the world. But new research shows that Cascadia intraslab earthquakes, slips that occur within the subducting Juan de Fuca tectonic plate, produce fewer aftershocks compared to similar quakes in other subduction zones. The study shows that in Cascadia, the number of aftershocks for a given magnitude event are less than half the global average for this type of earthquake.

"Additionally, the USGS has begun to generate quantitatively estimated aftershock forecasts based initially on global patterns," Gomberg said. "Given these contrasting regional experiences, it seemed time to generate some objective numbers to base Cascadia’s forecasts on."

The researchers analyzed catalogs of earthquakes between 1985 and 2018 from the UW-based Pacific Northwest Seismic Network and the Geological Survey of Canada. Earthquakes that took place in the upper plate produced the most aftershocks, they found. Aftershock rates were the lowest for intraplate earthquakes in the Puget Lowlands portion of the subduction zone, which contains the Seattle metropolitan area, while aftershock rates varied at the northern end of the zone, near Vancouver Island, and at the southern edge, near Cape Mendocino in northern California.

The tectonic environment at each end of the subductionzone could help explain why aftershock production is higher at the edges, the researchers said. Multiple tectonic plate boundaries meet in these areas, which could "concentrate stress, so more faults exist and are closer to failure than in other areas," they noted.

Why Cascadia produces so few aftershocks is still unclear, but "one strong possibility would seem to be that temperature for the deeper slab earthquakes is a dominant controlling parameter," Bodin said. In Cascadia, "the young, hot Juan de Fuca plate is being jammed beneath North America."

The deeper the earthquake, the higher the temperatures, and the researchers found that aftershock activity decreases with depth. "However, this is not so different than southern Mexico, where, as we noted, recent intraslab mainshocks have supported vigorous aftershock sequences," Bodin said.

The analysis was limited by Cascadia's low seismicity rates, and sparse data to pinpoint the location and depth of most earthquakes in the region. Methods that help researchers detect and locate smaller earthquakes could provide a better sense of overall aftershock rates and the physical processes that control them, the authors argue in the paper.

For more information, contact Bodin at bodin@uw.edu or Gomberg at gomberg@usgs.gov.

Adapted from a press release by the Seismological Society of America.