University of Washington glaciologists will join colleagues from around the country in a ne!w effortto discover Antarctica's oldest ice and learn more about the history of our planet's climate. 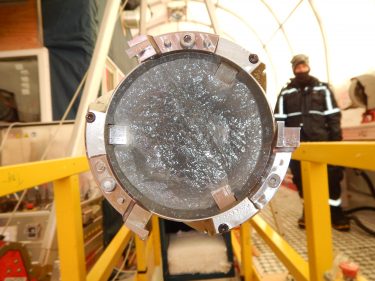 Ice from a more than 1-mile-deep ice core drilled at the South Pole in 2016. That ice extended back more than 54,000 years, while the new effort aims to find an Antarctic ice record that goes back 1.5 million years.T.J. Fudge/University of Washington

The new Center for Oldest Ice Exploration, or COLDEX, will be created under a five-year, $25 million National Science Foundation grant announced on Sept. 9. Roughly $5 million of that grant will go to the UW.

UW researchers will lead in aspects of Antarctic fieldwork and modeling to identify the drilling location, deploy new technologies to scan the ice, and use new ways to analyze the ice once it is retrieved. The center will bring together experts from across the United States to generate knowledge about Earth's climate system and share this knowledge to advance efforts to address climate change and its impacts.

"Establishing a center makes it possible to go after the big scientific goal of finding and analyzing the oldest ice remaining on Earth to a!ddress fundamental questions about the climate system," said co-principal investigator Michelle Koutnik, a UW research associate professor of Earth and space sciences. "This is a tremendous opportunity that will bring together an ambitious research program with coordinated education, outreach and knowledge transfer programs as part of a new center that is founded on broadening participation in ice and climate science."

Michelle Koutnik, research associate professor in Earth and space sciences, surveys ice motion near the South Pole in 2016 as part of another effort. COLDEX will conduct ground surveys at unexplored locations in East Antarctica that are being targeted as deep ice-core drilling sites.Ben Brand/University of Washington

The oldest existing ice cores cu!rrently go back 130,000 years in Greenland and 800,000 years in Antarctica. The newly funded effort aims to find a continuous ice core that goes back 1.5 million years, and to recover chunks that are even older. Previous UW research has explored a possible location for this oldest ice record, in the Allan Hills region of East Antarctica.

A continuous record longer than 1 million years could offer new information about past climate transitions to help understand and predict current changes in the Earth's climate.

"This ice and the ancient air trapped in it will offer an unprecedented record of how greenhouse gases! and climate are linked in warmer climates and will help to advance our understanding of what controls the long-term rhythms of Earth's climate system," said principal investigator Ed Brook at Oregon State University.

UW researchers will help study potential drilling sites and model ice flow to find a location where the oldest ice-core climate record is preserved in Antarctica; apply new radar techniques for the first time on a large scale; and help develop novel methods for analyzing the ice that will eventually be recovered.

One aspect of COLDEX will involve new development of a probe, the University of Washington Ice Diver, that melts through layers of ice and provides information about the age of the ice and other data without having to lift a core back up to the surface. The t!echnology is being developed by COLDEX participant Dale Winebrenner, a UW research professor in Earth and Space Sciences and senior physicist at the UW Applied Physics Laboratory, in collaboration with Ryan Bay at the University of California, Berkeley.

"This is something that has never been done before. The idea is that it would have an optical device that could detect the amount of dust in the ice," Brook said -- without the need for a preexisting borehole. 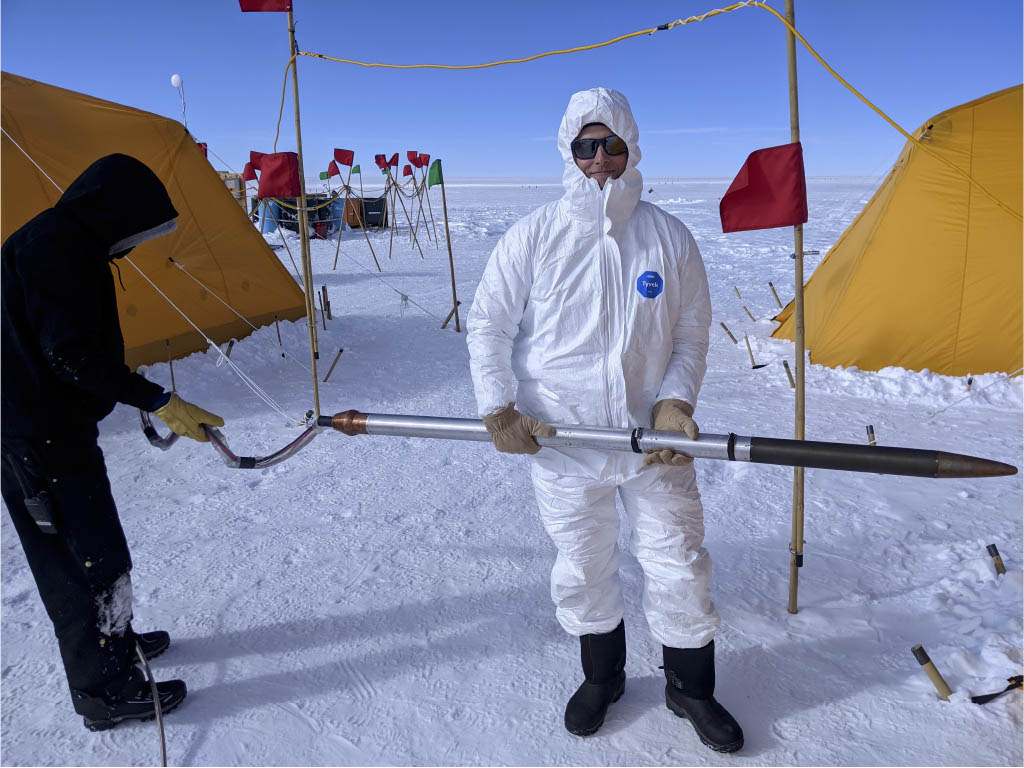 The University of Washington Applied Physics Laboratory's field team lead engineer Justin Burnett holds the Ice Diver during a deployment at Greenland Summit in May 2021. COLDEX will develop a longer version of this probe to reach depths of 3 km (almost 2 miles) into Antarctic ice while including an opt!ical dust sensor.Ben Brand/University of Washington

Because the atmosphere tends to be dustier during colder periods and after big volcanic eruptions, the researchers expect to be able to count the dust cycles to estimate the age of the ice, even before the ice is recovered and brought back to the laboratory for more detailed analysis.

"The Ice Diver allows us to reach great depths in the ice for logging dust levels at costs low enough to sample in many places," Winebrenner said.

Another UW-led effort recently funded by the NSF will obtain a 150,000-year ice core from a nearby site in Antarctica, at Hercules Dome, to explore past changes in the West Antarctic Ice Sheet

The first fieldwork season is in the planning stages for 2022-2023. Initial on-the-ground work will be done in the Allan Hills region of Antarctic!a and airborne campaigns across a target sector of East Antarctica, Koutnik said. After that, ground surveying will be done in East Antarctica to help target the specific deep drill site. The deep ice core would be extracted in a second five-year phase of COLDEX.

"Many researchers at UW, including new young scientists, will come together and contribute to the ambitious center goals of understanding the ice sheet and the climate history," Koutnik said. "This is really exciting science and a fantastic opportunity for our community of researchers at UW to work together and to collaborate across institutions and across disciplines to address major questions in ice core and cryosphere science."

Additional partners include the American Meteorological Society, Inspiring Girls Expeditions, the Earth Science Women's Network and the Alaska Native Science and Engineering Program, helping to meet a program goal of enhancing diversity in Earth science fields. The center will work with the American Meteorological Society's educational arm to develop a summer program on ice cores for K-12 teachers who work with students from underrepresented backgrounds.

Funding will be available to support research experiences for undergraduate and graduate students and postdoctoral scholars, with the aim of recruiting diverse pools of candidates for those opportunities.

COLDEX is one of six new science and technology centers a!nnouncedthis month by the National Science Foundation. NSF currently supports 12 centers, with the last group funded in 2016. The objective of the program, established in 1987, is to support transformative, complex research programs in fundamental areas of science that require large-scale, long-term funding.